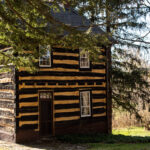 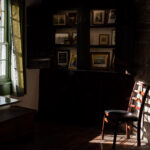 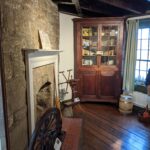 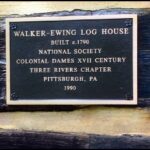 The Walker-Ewing Log House project protects a circa 1795 log house and its surrounding grounds to maintain scenic character and historic significance. The log house is not currently open to the public, though we encourage you to check back on this page for future programming events.

Over the years, the log home has been looked after by the Ewing family, the Pittsburgh History and Landmarks Foundation (PHLF), and the Pioneers West Historical Society (PWHS). On January 30, 1976, the Log House was listed on the U. S. National Register of Historic Places. On August 13, 2020, ownership of the Log House and property was transferred to Allegheny Land Trust, and the Western Pennsylvania Conservancy (WPC) became a holder of a Building Preservation and Conservation Easement on the Log House.

Through ALT’s ownership and WPC’s easement, the architectural, historic, and cultural features of the home and surrounding green space will be forever protected for conservation and preservation purposes.

Much of the known history of the log house was researched and recorded by the Walker-Ewing family and by Pioneers West Historical Society (PWHS).

The exact date of the construction of the log house is uncertain. One of the stones of a fireplace has the date “1762” carved into it, which is thought to be the beginning date of the house’s construction.

Beginning with Alexander Ewing, the Ewing side of the family came to the Noblestown area on Robinson Run in the late 1770’s. Alexander met with a cousin in the area and settled at what became Walker’s Mill near Carnegie, PA.

The Walker family also lived in the area, and in 1782, Native Americans attacked Gabriel Walker’s log cabin, captured two of the five Walker children, burned the house to the ground, and attacked Ewing’s Fort. The Native Americans killed the two youngest sons, took Gabriel Walker’s two daughters and another son as prisoners, then crossing the Ohio River into Native American Territory at Logstown. The three children were ultimately taken to an English camp in Canada and were returned 21 months later to Philadelphia, possibly as returned prisoners of the U.S. Revolutionary War.

On December 13, 1817, the land was patented to William Ewing, the youngest of Alexander’s four children. In 1808, William married Jane Walker, who was the daughter of Isaac Walker of Walker’s Mills. Isaac then gave the log house to Jane as a wedding gift.

The log house remained in the family, changing hands between generations until, on October, 1973, Jane Ewing Rovensky Grace and her husband Robert Grace gifted the log house, land, and furniture to the Pittsburgh History & Landmarks Foundation (PHLF).